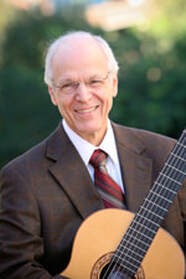 The fifth Lloyd Ketterling Christmas Carol, composed by Jeffrey Van, will be premiered by CAE at their Christmas concert at Assisi Heights.

​Guitarist and composer Jeffrey Van has premiered over 50 works for guitar including Dominick Argento’s Letters from Composers, five concertos and a broad variety of chamber music. He has performed in Carnegie Hall, London’s Wigmore Hall, and the Kennedy Center in Washington, DC, and as part of Duologue, with flutist Susan Morris De Jong, has premiered and recorded commissioned works from more than a dozen composers, including Stephen Paulus, Roberto Sierra, Tania Leon, Michael Daugherty, Libby Larsen and William Bolcom.

He has been featured on many NPR broadcasts, made several solo and ensemble recordings and appeared on ten recordings with The Dale Warland Singers. Van has performed and taught master classes throughout the United States, and earned a Master of Fine Arts degree from the University of Minnesota School of Music, where he is a lecturer in classical guitar. Former students include Sharon Isbin, John Holmquist and members of the Minneapolis Guitar Quartet.